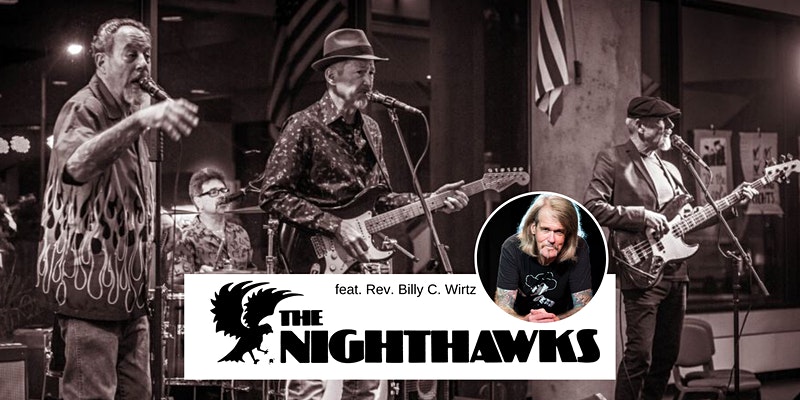 The legendary Washington, DC Blues and roots band the Nighthawks return to Gainesville for the first time in 14 years, and will make their Heartwood Soundstage debut March 13th in a North Central Florida Blues Society event! They’ve built a reputation as a live band touring, and where often called the hardest working band in America.  This most venerable D.C.-based band of Blues warriors have entertained audiences all over the world with their unique blend of Blues, rock, soul, R&B, rockabilly and swing. Their hard driving, soulful, and sometimes raucous live performances earned them a reputation as “the world’s best bar band.” There’s even a documentary recently made about them, Nighthawks on the Blue Highway. Mark Wenner has fronted the Nighthawks since 1972, and the original lineup of the quartet ruled the highways and honky-tonks, opening many doors and forging many touring routes for their contemporaries, including the Fabulous Thunderbirds, Stevie Ray Vaughan and Robert Cray, and played with as many Blues and Rockabilly legends as they could. They opened show after show for Muddy Waters, James Cotton and Carl Perkins, and backed up and recorded with John Hammond and Pinetop Perkins. “Our sound is based on a Chicago Blues band, but we could always do a country song or an old rock-and-roll song — or even something by a contemporary songwriter or a Motown kind of song,” Wenner said. Opening for and playing with the Nighthawks is Reverend Billy C. Wirtz, a comic genius, gifted pianist and American musicologist who defies easy classification. “I like to think of myself as the Victor Borge of the Blues,” states the Reverend, but Billy goes way beyond Borge both in scope of subject matter (from politics to social commentary) and, of course, in taste. In fact, no theme is too extreme, taboo, or undignified for the Reverend, so long as it garners a good laugh. Likely the only person on earth to be mentored by Chicago blues pianist Sunnyland Slim and also to work with Root Boy Slim, Wirtz has also worked with the famed DC Blues band the Nighthawks for decades.