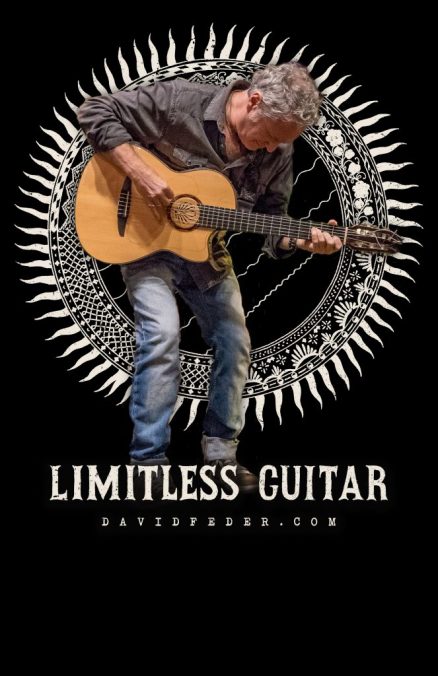 UPDATE 6:30 PM August 2: David Feder has a medical emergency (appendicitis) and is undergoing surgery. He is expected to make a quick and full recovery, but unfortunately not quick enough to perform at Heartwood on Saturday. We will issue refunds for all tickets. We’ll announce a rescheduled date as soon as we know one. We apologize for the inconvenience and wish David a speedy rebound.

“Dave has a magic way of making you feel like an old friend with songs that are original and intimate.  He is a master guitarist who plays his own intricate Flamenco influences finger-style music with laid back island feel.” – NPR

Dave Feder has carved out a niche of his own, playing a signature blend of Flamenco-infused folk music. His laid back style and command of his instrument easily disguise the complexity of his blazingly deft finger picking. Three decades of island-living in the Florida Keys has influenced Feder’s breezy, approachable, and sophisticated music. His musicianship incorporates miles of styles (savvy yet innocent, intelligent yet accessible) woven into a personal journey, telling stories about life through the strings of his guitar.   Feder has been praised by NPR’s All Songs Considered, World Café Live, PBS Art Loft, NPR’s Folk & Acoustic Music, The Miami Herald and Time Out magazine among others.  Feder spent six weeks at the top of the Broadjam World Music Chart with his critically acclaimed album “Black Emerald,” and his music has been featured on All My Children (ABC), Art Loft (PBS), the NBC Good Morning show, National Park Service educational videos, and Florida Everglades documentaries. As a founding member of ICE (Islamorada Community Entertainment)—a 501C3—David has helped raise hundreds of thousands of dollars in scholarships for students pursuing arts, music and dance. A champion of the local arts world in the Keys, Feder produces the Florida Keys Bay Jam, now in its 23rd year, a music festival that raises money for local high School Arts and Music Grants.