Richard started playing the guitar at age 5 and has never looked back. Focusing early on with the fingerstyle guitar of Chet Atkins and Jerry Reed, he began transcribing classical music, Jazz, the gypsy style of Django Reinhardt, bluegrass, ragtime and the blues to Sousa marches. Now a seasoned performer in his forties with thousands of performances worldwide to his credit. In 2018, Richard performed in five continents... North and South America, Europe, Asia and Australia including performances with and… 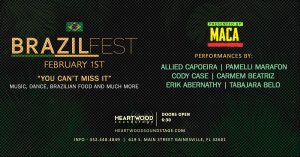 Brazilfest is back! With live music, capoeira, food, art, and much more! Stay tuned for this year's lineup.

Changeville and Heartwood Present: The Feminist Buzzkills of Comedy 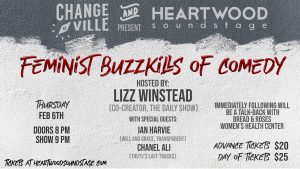 Hosted by Lizz Winstead (Co-Creator, The Daily Show) Special Guests: Ian Harvie (Will & Grace, Transparent) and Chanel Ali (TruTV's Laff Tracks)   Welcome to the Feminist Buzzkills of Comedy! Lizz Winstead (Daily Show Co-creator and proud Feminist Buzzkill) is hosting an evening of comedy produced by Abortion Access Front featuring some of the most hilarious feminist buzzkills in stand-up. These amazing performers will have you laughing and fighting the Patriarchy all in one night! In addition to the performances,… For information on becoming a Friend of Heartwood, which qualifies you for discounted tickets, please check out our Support Page. Songwriter, guitarist, painter, fiddler, slide player, eco-village member and believer in all things possible. Named 2016 Folk Alliance International Artist-in- Resident, he’s played with Suzanne Vega, Dar Williams, David Francey, John McCutcheon, John Gorka, Judy Collins and 100’s more. Whether he’s picking his 48 Gibson, weaving through lap slide songs or looping his fiddle, he will draw you in. It… 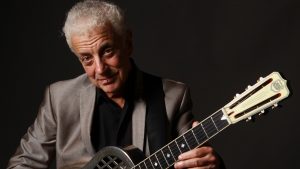 Doug MacLeod is a prolific singer, songwriter, engaging storyteller, and masterful guitarist, and he has become one of today’s most award-winning and loved acoustic Blues artists still touring today. And Doug returns to Gainesville, Florida to play Heartwood Soundstage, Gainesville’s finest listening room, courtesy of the North Central Florida Blues Society. He has won five Blues Music Awards, including Acoustic Artist of the Year in 2017 and Acoustic Album of The Year in 2018. Doug is an international touring artist… For more information on becoming a Friend of Heartwood, with benefits including discounted tickets, click here. When you listen to Over the Rhine, the supremely talented musical couple comprised of Karin Bergquist and Linford Detweiler, you quickly fall under the spell of Karin’s timeless voice “which has the power to stop the world in its tracks” (Performing Songwriter). But then the songs start hitting you. Paste magazine writes, “Over the Rhine creates true confessional masterpieces that know neither border nor…